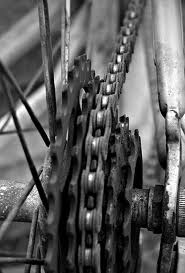 As any little girl, I would vie for my dads attention. I thought if I knew “stuff” about the “stuff” he was interested in, it would make him take an interest in me and be proud. My mom always taught me to “be interested in others and they will be interested in you”. To show my interest, I would play with my dad’s tools. Not like play, play, but organize play. I loved tidying his work bench in the garage and he had given me permission to do that whenever I wanted.

Being the achiever that I was, I thought it would make me a better mechanic if my hands were dirtier. My eyes scanned the garage for something that would do the job for me and rested on my new bicycle. It was a Huffy 10 speed that was a bit big for me, but it was bright yellow and it had the curved handlebars that proved, it was a big kids bike.

I decided I would test my mechanic skills. I got out the tools and loosened and tightened multiple bolts and nuts. This in effect changed the height or position of my handlebars and/or seat which after moving returned to the original positions. However, my hands weren’t quite dirty enough. In fact some of the dirtiness had rubbed off. I wanted to prove, not only to myself but also to my dad, that I was a mechanic with the dirty hands to prove it.

With frustration I looked around the garage again and then back at my bike. I was disappointed! So close (since I felt like a mechanic) and yet I didn’t have what I considered proof that I was (dirty hands) truly a mechanic. Being the optimistic person that I am though, my mind started racing and trying to figure out how to reach my goal.

And then it hit me… The chain.

This new bike’s chain was fascinating to me since I had gone from a single speed bike to a 10 speed. The chain was oily and so were the gears (I secretly thought they were beautiful). I realized I could remove the chain, see how this new bike worked with all those notched circles that were so perfectly placed and most of all, accomplish my goal- dirty hands.

This childhood dilemma is so similar to that of networkers today! They feel so close since they are a networker, but yet so far from reaching their goal by receiving business from it. When you are networking do you franticly look for your quantifiable results and then when they don’t happen right away, walk away defeated and disappointed? Are you open to new opportunities to learn? Are you looking for situations that will help you accomplish your goal?

There are a few simple ways that you can make the most of your networking mechanics.

Remember, the “feeling” you get from stepping outside the box in your mind is very satisfying. You grow, you learn and you’ve only just begun to achieve your potential.

I’m not by any means a mechanic, but I really thought I was, and to this day take pride in enjoying learning how things work. There is much more to networking than just handing someone a card and saying let’s get together. It’s also more than sitting down with someone and showing them what you can do to ease their “pain”. It’s about creating the relationship FIRST, sincerely. Trust me, I knew my bike well, before I could actually reach what I called success. I learned all about it and how it moved and worked but only THEN did my hands get black.

When I came in with my dirty hands and smudged face that afternoon, my mom asked what I had been doing. As I rubbed my black greasy hands together, I proudly answered, “I was just workin’ on my bike”. My mom’s blue eyes sparkled and as she smiled she said, “You’ve always been mechanical, Tara”.