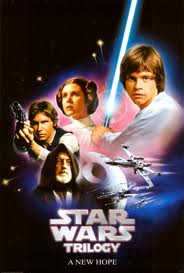 "May the Force be with YOU"

Ok, I’ll admit it… I’m a Star Wars fan and so is my husband.  I saw the originals in the theater when they came out and when the new versions came out we saw the midnight showings (no we never dressed up).   It’s also a generation thing, our kids know the lines almost as well as we do and have watched it so many times, they’ve pointed out the little hick ups in the filming that my husband and I missed as kids.   We have continuous jokes in our house about joining the dark side and getting dark side points.  And yes we’ve got paraphernalia… action figures, tee shirts, helmets and light sabers and other such items.  And our trivia skills as a family could give George Lucas himself a run for his money.  We, as a family, enjoy it.

What does that have to do with Networking, you might wonder?  I’ve lost track of how many times I’ve seen the original Star Wars movie “A New Hope”, but was watching again the other day.  I saw a similarity that I had to write about… bear with me here.

Luke was a good pilot before he ever left Tatooine his home planet. He wanted more for himself though and wanted to leave the planet like his friends. Luke saw a great future ahead if he could move forward.  But his Uncle Owen and Aunt Beru wanted him to stay safely hidden there.  They knew if he left there would be danger.  So, Uncle Owen kept Luke doing menial tasks around their homestead, rather than fulfill his potential.  Luke was discouraged because he knew he could do more.

The same thing happens with Once timid people.  We start with baby steps (see previous blog) and eventually we see our potential and we want more.  We are proud of our accomplishments and see “A new hope” in our future.   But like young Skywalker, something happens that can be quite discouraging.  Sometimes the people we are closest to, like us to stay where we are.  It’s as if they sense danger with our new found growth and confidence.  What can we do?

Here are a few tricks to stay positive as you continue on your journey, too bad Luke didn’t have these!

Luke moved forward because his family all perished and he had no place else to go.  Hopefully, our path isn’t that dramatic and we don’t lose any friends along the way.  However sometimes our “Average” of the people we hang around with will change.  It’s ok.  Even Lukes average changed  and he  had some helpers to help him along his journy, Obi Wan, Han, Leah and his droids…and of course “The Force”.  Remember this is the journey you chose and you are getting closer to your goal whatever that might be.  You can be proud for the path you’ve taken and your journey so far.  When you keep moving in a forward direction, new doors, opportunities and people will be open to you.  By taking those forward steps you allow yourself to be open to them.  And yes, I’ve got to say it… May the Force be with you!

Are you on a path that took a bit of struggle to reach?  Tell us one thing you are doing now that you never thought was possible.  We’d love to hear what you have to say!