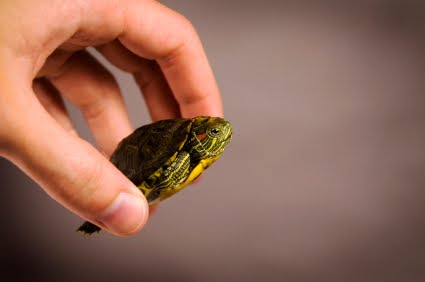 Yesterday I saved a pretty little turtle who was trying to cross the very busy road I live on. I saw it crossing and felt the need to go help. But there were cars racing by and I cringed each time one would pass, for fear it would run over that scared little turtle. I waited for the right moment, ran into the street and grabbed it by its shell. I got to the other side of the road and placed it over by some wetlands that are nearby. I felt so good that when I got back into my house, I had to post it on Facebook!

I haven’t been able to quit thinking about it though. But today I figured out why. I could relate to that little turtle. It had a goal, to get to the other side of the road. It was taking the steps to accomplish that goal but was having a hard time reaching it. It would take a few slow steps but then a car would race over it and it would start to turn around to come back. It was as if fear was making it turn back even though the goal was in sight.

As a Once Timid Networker, I used to go to networking events just like that turtle. I had the goal, I knew what to do, but as soon as I was surrounded by other networkers racing around, exchanging business cards, making appointments in their calendars, and talking to others I would get nervous and overwhelmed and fear would take over. At times, I even tried to head back to the door just so I could get away. Have you ever felt that way? Have you ever observed someone feeling that way?

Like that turtle, I needed a rescuer, someone to help me reach my goal. I began to realize that if I could be open and honest with a trusted friend or two, they could be my rescuers and help me when I needed it. At first I was their shadow. I stayed close and met the people they met and moved on when they moved on. I observed every detail, the questions they asked, what they did with the business cards they collected, even their body language. I wanted to be as comfortable as they were and move through the room effortlessly, like they did.

It became easier and gradually I would move away to talk to someone but then come back to my rescuers side. I would make it a goal to venture out and try to meet one new person. The next time I wanted to meet two new people. I did this over a period of time and then one day I realized something changed.

A few months ago I went to a networking event. My rescuers were there and I waved across the room to them when I arrived. I looked around the room and got my bearings but I didn’t rush to my rescuers’ side. Instead I looked for the new person, the timid one, the one who was overwhelmed and paralyzed in the middle of the room. They had their goal, which was why they were there, but they were eyeing the door with that all too familiar gaze. I wanted to help them feel at ease the way my rescuers had helped me.

When I left that night, I realized I never did share more than a sentence or two with my rescuer friends. I missed them and felt bad because being by their side had become such a habit. But I also realized I had grown. They had helped me cross the busy road. They had helped me reach my goal. For that I am so grateful. To my rescuers, Chad and Steve, thank you so much.

Now please excuse me, I’m off to go look for more turtles…

Tara Schmakel- The Workroom at Tara’s